From the German Nagoya Protocol HuB

Here you can find all the reports from the German Nagoya Protocol HuB workshops.

You can find the final report here.

Reports from the regular meetings of the GNP HuB Network (Stammtisch)

Here you can find reports from meetings of the German Nagoya Protocol HuB Network (the “GNP HuB Stammtisch”).

At this meeting, we launched the network and had a quiz about common questions on compliance in the European Union. Read the report here.

At this meeting, we exchanged on the Nagoya Protocol and what it means for document and sample management. Read the report here.

Here you can also find a recent publication in Trends in Biotechnology from the Leibniz Institute DSMZ-German Collection of Microorganisms and Cell Cultures    “DSI, the Nagoya Protocol and Stakeholders’ concerns”. For more information on DSI, see below.

Here you can download our flyer and our posters. If you are interested in having hard copies of these materials sent to your institute or university, just contact us. 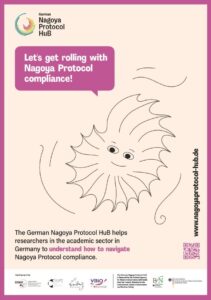 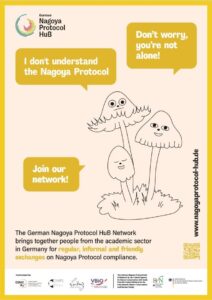 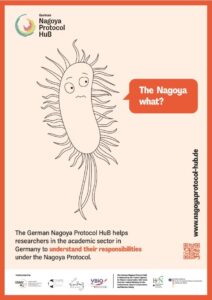 From the German Federal Agency for Nature Conservation

There a number of publications that can be found directly on the website of the German Federal Agency for Nature Conservation that address the implementation of the Nagoya Protocol in the European Union as well as access and benefit-sharing measures around the world.

Publications about compliance in Germany

If you are interested in understanding more about the activities of the competent authorities in the European Union, you can refer to the reports of the first and second meetings of these authorities that were hosted by the BfN in 2017 and 2018. These documents address topics such as:

If you are interested in access and benefit-sharing measures of various countries, there are several useful publications that were published by the German Federal Agency for Nature conservation.

In 2017 and 2018, the German Federal Agency for Nature Conservation hosted two meetings on the island Vilm in the Baltic Sea. People came from around the world came to explain the access measures in their countries.

At the first dialogue in 2017, the ABS measures in Australia, Brazil, Costa Rica, Ethiopia, India, Kenya, Mexico, Peru, Philippines, South Africa and Viet Nam were examined. The final report can be downloaded here.

At the second dialogue in 2018, the ABS measures in Antigua and Barbuda, Benin, Bhutan, Dominican Republic, Ecuador, France, Guatemala, Madagascar, Malaysia, Republic of Seychelles, Uganda were explored. The final report can be downloaded here.

The German Federal Agency for Nature Conservation publishes a newsletter several times a year (available in German only).